In the first installment of the Foreign Entanglements series I related that I was inspired to try to go trout fishing in Afghanistan in 1987, despite the Soviet occupation of the country, upon hearing rumors that a “crazy French doctor” did exactly that every year. A few years ago I wrote about my failed attempt in a Virtual Angler blog post for a newspaper to be named later (or not). A couple of weeks after that post was published, I got an email from Jean-Jose Puig. Doctor Jean Jose Puig, writing from France, confessed to being French, and a doctor, and to flyfishing in Afghanistan. He denied being crazy. We shared a wonderful correspondence, in which he told me he had not only fished in the mountains of northern Afghanistan since 1973 but that he also raised brown trout there and stocked more streams. He was a close friend of the great guerrilla commander Ahmad Shah Massoud and had been instrumental in bringing medical teams into the northern mountains to treat the sick and wounded. The “crazy” French doctor became one of my heroes.

Since that 1987 misadventure that ended in Shangri-la (see Foreign Entanglements II) I have spent quite a lot of time in Afghanistan but have never achieved the goal of flyfishing there, for trout or any species. I did, however, manage to go flyfishing in Baghdad, Iraq, in a murky lagoon surrounding the one of Saddam Hussein’s many over-the-top palaces. The year was 2007, four years after the U.S. invasion, and I was living in a large tent with about 50 soldiers and serving as a communications adviser to the 3rd Infantry Division’s Public Affairs Office. The tent was air-conditioned. Did I say air-conditioned? You could have hung sides of beef in there for weeks with no spoilage. When you emerged from the Arctic tent into the blast furnace of summertime Iraq the heat would nearly knock you flat. But life took a turn for the better when I learned of the Baghdad Flyfishing Club.

Through the miracle of email, folks back home had learned that soldiers in Iraq were hankering to fish in the emerald-green lagoons that surrounded Saddam Hussein’s several palaces, including the Victory Over America palace that now stood in ruins thanks to America.

The “Victory Over America” palace.

Flyrods, reels, flies arrived at Victory Base. Orvis and Sage were not in evidence. In a small cluttered office commanded by an Army captain I selected a rod and a handful of flies.

In the dawn’s early light, before the searing heat of the day I walked, flyrod in hand, to the closest palace, the grand Al-Faw, which was relatively undamaged and now housed a variety of U.S. military offices. I knew that the waters around Al-Faw were teeming (infested?) with a variety of aquatic creatures, none of which I wanted to actually touch (there were rumors that Saddam’s sadistic son Uday had fed…well, TMI). I had been there one evening to see soldiers dump some of the day’s food waste off the bridge that connected the palace to the mainland, and had seen the water boil as some very large fish — giant carp? — fought for the scraps. I did not want to tangle with one of those, but I did want to catch one fish on a flyrod in Baghdad, just to say that I had done it. I tied on a Hornberg and began flogging the water. After about 30 fishless casts-and-retrieves, a strike! 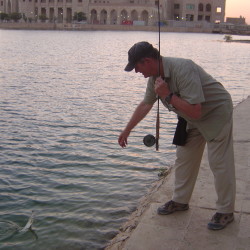 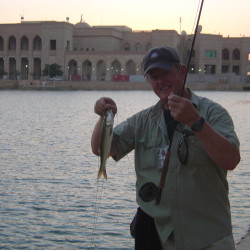 Posing with the catch.

Followed by a brief skirmish, and the landing of a silvery dagger of a fish, about twelve inches long, that was known locally as an asp. There was something snakelike about it, and once I had posed with the trophy I couldn’t get rid of it fast enough. I would say “Mission Accomplished,” but that phrase had already been used, very prematurely.

This wonderful book will make you hungry

This wonderful book will make you hungry

Seniors Not Acting Their Age